The other day while awaiting a bus in Harvard Square, I picked up the September issue of the British classical music review Gramophone.  I hadn’t purchased one in years, but what caught my attention was the cover story “Behind the image…the real Glenn Gould.”  It was the 30th anniversary of his passing.

You might well ask, why would this have been so important?  Allow me to give you a little background that will answer that question.

I have always been attracted to polyphony (two or more simultaneous melodies that work in harmony with each other) as a musical language.  Polyphony—or contrapuntal music, as it is more commonly known—was the dominant language of western classical music from about 900 A.D. to the mid-1700’s. And it continues in various forms to the present time.

Over the years, the glories of polyphony have represented a metaphor of life for me—individual identities operating in concert with each other, all under the control of a governing and guiding principle of harmony.

I recall that when I was assigned my first Beethoven piano sonata at the age of eleven, a year after I had begun piano lessons, I couldn’t wait to get to the quasi-polyphonic sections.  The rest of the piece (scalar passages, themes, arpeggios, etc.) was just filler for me—the stuff that I had to get through to get to what I inherently felt were the “really good” parts!  And from that point on I gravitated to the music of Johann Sebastian Bach—brimming, as it often was, with polyphonic forms. 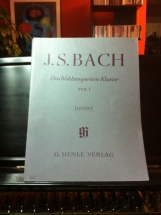 About 10 years later, I first heard the recordings of the iconic Canadian pianist, Glenn Gould, playing Bach which—as we used to say—”blew my mind”!  I had never heard such musical clarity of thought, such originality, and such technical perfection and freedom.  All of the multiple melodies (or voices) in a Bach fugue were laid bare—each with their own life, their own identity, yet all in perfect balance to the whole. It was really a transcendent demonstration of the principle of polyphony.

That encounter with Gould’s recordings changed the way I played Bach and, indeed, all music.

His performances made me look at music from a new and fresh angle. It naturally caused me to break away from the traditions of piano performance—traditions that actually had very little to do with the way the music had been played by the original composer or performers in their respective time periods—but which had mistakenly taken on an unwarranted authority for decades.  Traditions which generally forced musicians into one basic school of thought—albeit with what amounted to relatively minor variants.  It was a type of mental artistic slavery, if you will, that I was only too happy to be liberated from.

And then 20 years later, I had my first exposure to Christian Science—an exposure infinitely more profound and that continues to resonate and unfold to this day.  Where Gould’s performances changed my way of thinking about music, Christian Science changed the entire way that I thought about life. In fact it changed the very course, as well as every facet, of my life.

As I grasped the Principle behind the ideas in Mary Baker Eddy’s Science and Health and experienced their healing effects on my life, including physical healings, I saw the utter utility and practicality of this truth. Of the Truth—of God.  But of greater import, it enabled me to devote my life to healing others.

Let’s speak plainly: Each of us has access to this Science and the commensurate ability and responsibility to use it by healing our neighbor if we are to fully follow the Two Great Commandments in loving God and our neighbor as ourselves.

Don’t let blind adherence to tradition bind you from finding the freedom that truly blesses all.

Christian Science explains all cause and effect as mental, not physical. It lifts the veil of mystery from Soul and body. It shows the scientific relation of man to God, disentangles the interlaced ambiguities of being, and sets free the imprisoned thought. In divine Science, the universe, including man, is spiritual, harmonious, and eternal.

Friends, too much is at stake to not be willing to change course!

2 thoughts on “A change of course”