“Well,” you might be asking yourself “what’s the difference?”

In a simple phrase: Night and Day! 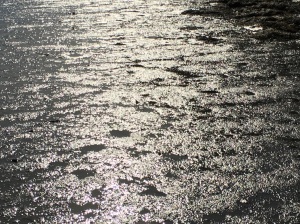 Reacting is one of the tactics of mortal mind that would draw us into its web of lies through emotions, disappointments, personal will, etc., by seeking to have us attempt to work on its terms.  Terms that are the essence of the carnal mind and that would strive to “…deceive the very elect.” (Matthew 24:24)

Thought will waken from its own material declaration, “I am dead,” to catch this trumpet-word of Truth, “There is no death, no inaction, diseased action, overaction, nor reaction.” (Science and Health, p. 427)

Jesus taught us to walk over, not into or with, the currents of matter, or mortal mind.

Walking over clearly involves not reacting and being pulled down into the currents—the modes—of material thought.  You’ll recall that the Apostle Peter, when directed by the Master to come out of the boat and walk over the waves as the Savior was doing, initially was successful.  Initially, that is, until he looked at the ferocity of the waves—the picture that mortal mind was presenting to his thought through the material senses.  A picture that engulfed him in the mesmerism of fear and that led him to begin to sink. (Matthew 14:29-31)

Shouldn’t we, as Christian Scientists, recognize that it is imperative that we do not react to the false images that mortal mind is placing before our thought—whether of disasters, diseases, accidents, conflicts, problems within our churches or families, or any other inharmonies that error would use to exalt itself via its lie that God is not present or not all-powerful?

What to do then?

Handle those falsehoods by responding with the metaphysical truths as revealed and taught in Christian Science—that’s what!

Don’t accept the lies that are presented.  Realize that they are each and every one of them originated and supported by the material senses (Science and Health, p. 318) and therefore have no reality to them.  None!

We can’t possibly begin to fulfill our responsibilities as healers if we’re busily engaging and believing in the reality of evil, can we?  We have to see how it’s trying to operate in thought, expose and denounce it, assert the truth and see error’s nothingness thereby destroying the claim.

And lest anyone may be thinking that the current political climate and outcome of the presidential election in the United States are somehow exempt from this necessity, let’s not forget that Mrs. Eddy admonished us to:

Pray that the divine presence may still guide and bless our chief magistrate, those associated with his executive trust, and our national judiciary; give to our congress wisdom, and uphold our nation with the right arm of His righteousness. (Christian Science versus Pantheism, p. 14)

Notice that she did not say: “only if he is the one we favored!”

Everyone deserves to be saved—to be awakened from the lie and enslavement of the belief of life and intelligence in matter.  Everyone!

But if we are agreeing with the lies about them—lies that would attempt to deface their true and only nature as the image and likeness of God—we are joining in with “…the accuser of our brethren…which accused them before our God day and night.” (Revelation 12:10)

Do we really want to do that?

And let’s not neglect the fact that the same biblical passage declares that it is because the accuser is cast down that “…salvation, and strength, and the kingdom of our God, and the power of his Christ…” is come and demonstrated.

Shouldn’t that be where our thought lands—not reacting but responding?

2 thoughts on “Reacting or responding?—that is the question!”