My beautiful Steinway was recently tuned and worked on by a wonderful piano technician.  In fact the piano never sounded better—except for a buzz that hadn’t been there in the past and which I hadn’t detected until after he left.  I became concerned particularly as the noise spread across an entire octave. 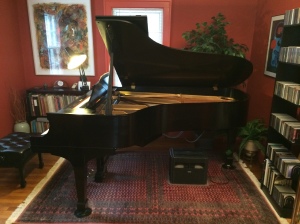 I took all the human steps to see if there was a screw loose on the instrument or if there was something else in the room that was vibrating sympathetically—all to no avail.  Such buzzes are often indicative of a serious problem involving the soundboard and which are also incredibly costly to repair.

I called the technician and he graciously said that he would return at another time to try to solve the problem.

The next day, while praying, the thought came to me to take the action (the keyboard) out of the piano.  I did and found one screw slightly loose, but as I slid the keyboard back into the piano I noticed that the problem hadn’t been solved.  Simultaneously I realized that if the keyboard was moved ever so slightly, the problem increased or decreased.  I moved it a bit—literally 2 millimeters—secured it and that was the end of the issue.  The piano was perfect and sounded glorious!

Two millimeters!  Such a tiny amount!  And yet, the difference between distortion and harmony—between a false and a right sense of being.  Between discord and healing.

The metaphysical points here are numerous.  Having exhausted all material methods, I turned to God and the specific directions came—which I obeyed.  And which led to seeing beyond the symptom and its superficial solution to the true and effective uncovering and correction of the underlying error—to the practical application of the truth.

How often do we find ourselves looking everywhere when confronted by a challenge, be it illness, employment, relationships, etc.—even while praying—but where we should?  Not digging deeply enough.  Not persisting to fully see, recognize, acknowledge, accept, and be grateful for what our Father-Mother God is revealing to us.  To the very idea which will save us.

How often have we accepted some erroneous thought—even one that might seem on the surface similar to or the same as Christian Science—only to find that we are not being healed or are not healing others?  Remember the difference between harmony and inharmony was minute—a mere 2 millimeters!  That’s how close error may seem to truth in its attempt to counterfeit it, but in reality and in the practical results brought about they are light years apart!

I learned a valuable lesson from this experience. I had let the concern—the fear—about my piano misdirect my thought.  But when I turned to God, was obedient to His leadings, and kept listening and digging deeper to observe what was being revealed to me, the correction took place.

Correct material belief by spiritual understanding, and Spirit will form you anew. (Science and Health, p. 425)

And that correction needn’t be gigantic.  It only has to be spiritual!